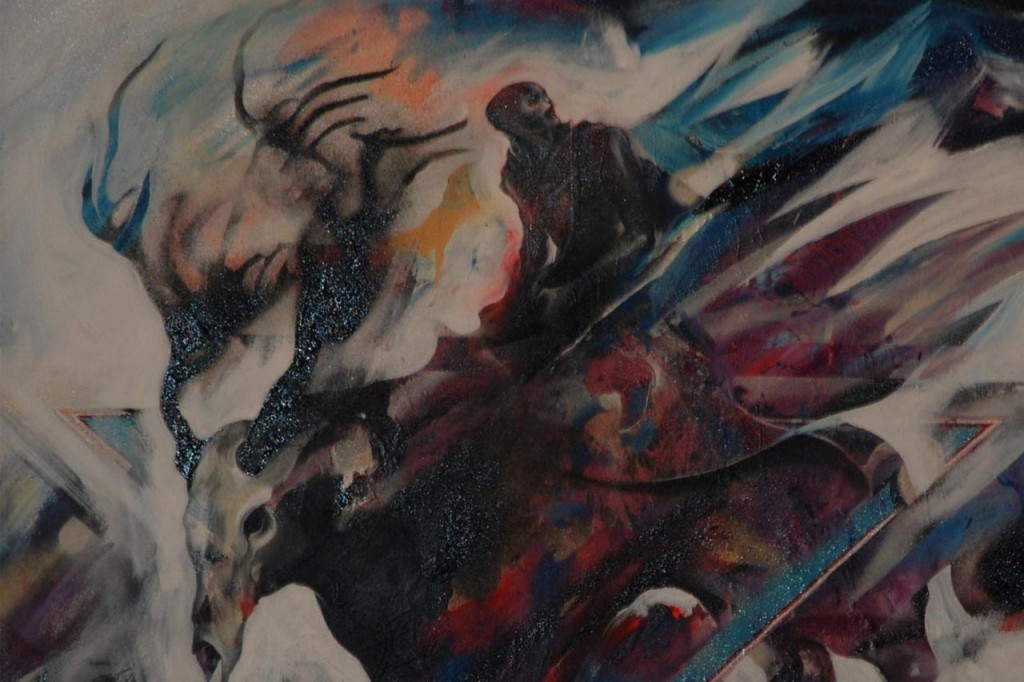 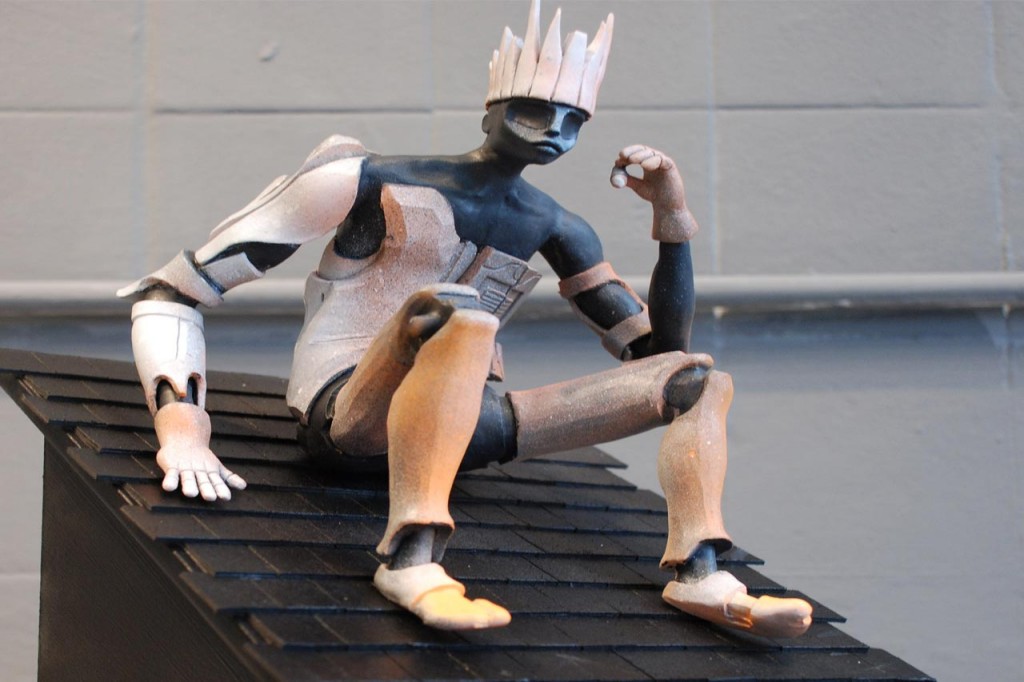 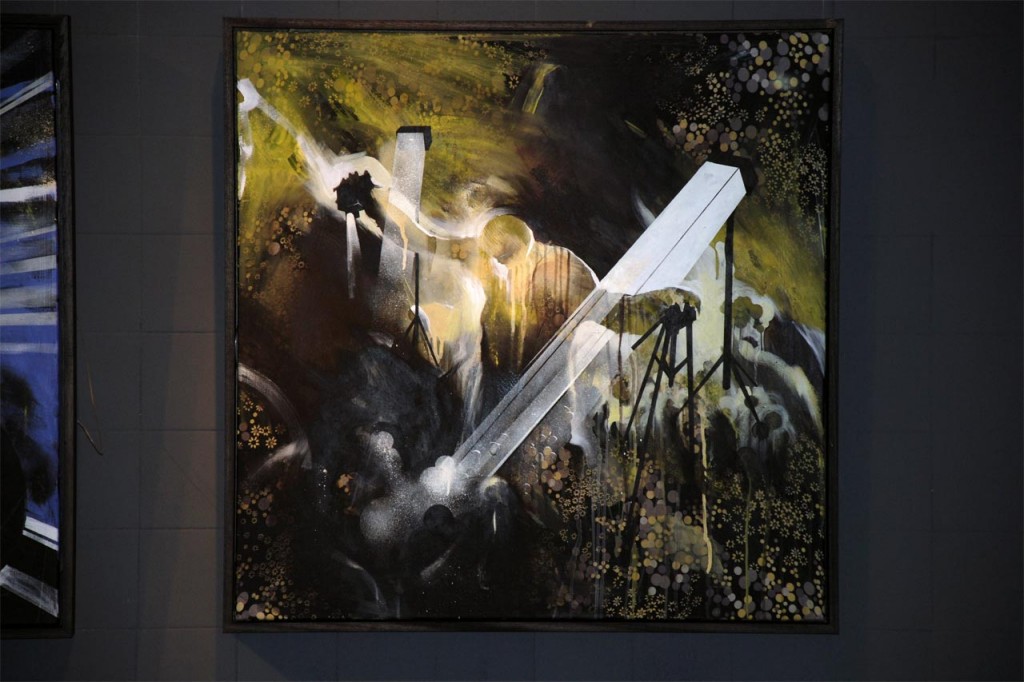 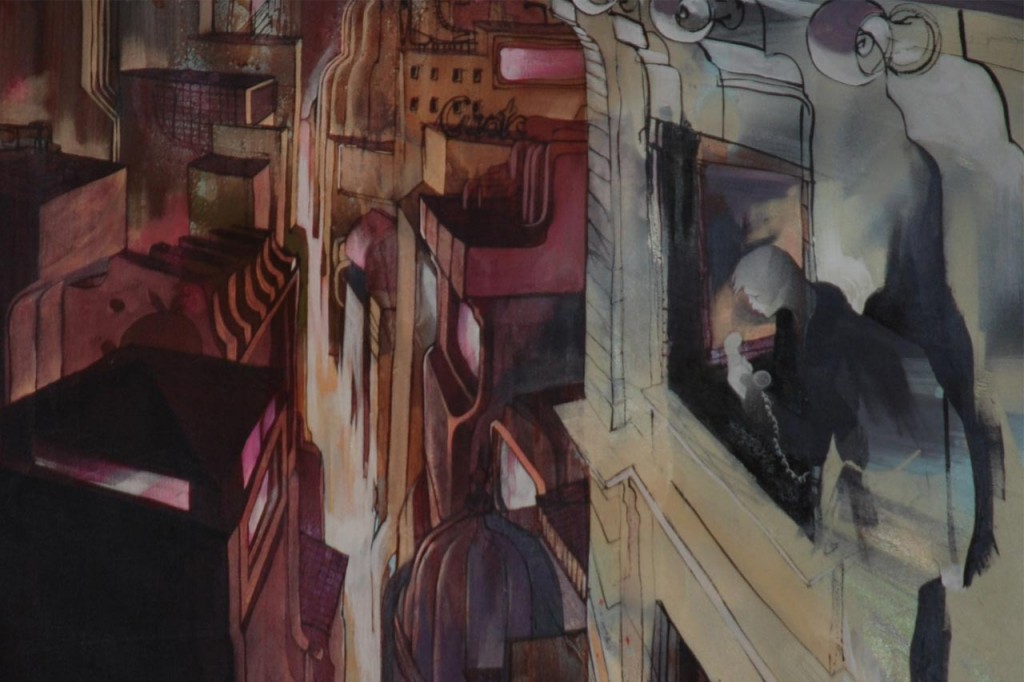 When I used to phone up Duncan (Mr Jago) he would have to go and stand on a chair in his kitchen to get reception, so I painted ‘Bad Reception’, the first painting I made for this body of work and the title of the show. You can see a character standing on the ledge outside his flat on the 25th floor. Does he have to stand on the ledge to get phone reception, has he just been given terrible news and he is about to jump, is he spying on the penthouse opposite, or does he just like standing on the ledge?

Bad Reception will show case never before exhibited works, painted over the course of the past two years, by Will Barras. Featuring stunning paintings in acrylic, spraypaint, oil and ink on canvas and linen as well as a brand new limited edition hand pulled screen print by the artist.

Mr Benn was a cartoon character who would leave his house everyday in a suit. I think he probably intended to go to work, but on his journey he walked past a costume shop which he could never resist going inside. Inside he would be given a costume and a fantastic adventure would begin… He would become a spaceman, a caveman, a chef, a knight of the realm, a wizard, a clown, a hunter… the list goes on…The brush strokes tell their own story. The shapes and colours gain momentum and begin to take you on a journey.

I want to maintain the natural flow and energy, the tension between abstract and figurative, while developing and elaborating on a narrative. To generate a multiple choice of possibilities of what could be happening Ideas usually develop from the everyday mundane, broken phone converations and awkward situations … and the way we all, in some small way, do what Mr Benn does. And with this in mind its not just whats happening within the paintings…I imagined what kind of person would have made these paintings, who would have painted these pictures. I like the idea that they weren’t painted by me, but found buried underground, or discovered in a monestry, or they’ve been hanging in the quarters of a shipwreck….. (Will Barras)

Will Barras composition and fluid lines provide poignant detail in liquid abstraction. The subject matter is readily familiar, but captured in a manner that seems to jar time and space with psychedelic abstraction. It is his way of expressing the emotional movements of this labour. It is therapy and pleasure and necessity.