Posted at 18:13h in Interviews by Lauren Admin
0 Likes

We are excited to introduce TelmoMiel, a muralist and image-making duo from the Netherlands. They create artworks that are both surreal and realistically rendered, with a tremendous amount of detail and vibrant colour. Combining multiple elements in a single composition, they layer references to the human and animal worlds to create complex creatures and fantastic scenarios. With positivity, humour and a touch of the romantic, their work is arresting and epic.

Their work will be featured in our upcoming 6 man show ‘Assemblage’ Opening 1st December. Drop us an email to contact@stolenspace.com to register your interest in their work.

Check out our interview with them below…

Hey guys, can you tell us a little about yourselves?

We are Telmo (27) and Miel (32) from Holland. Nowadays we paint murals and canvases. We’ve been interested in and doing graffiti / mural painting for a long time, and since the big murals came up it was always our dream to paint big walls. We met each other on Art Academy in 2006, and starting working together instantly. Since 2012 we started our ‘company’ TelmoMiel and things progressed quite fast. Both of us love realism and powerful abstracts, those core elements you can find in our work today.

Was it always a natural progression to start painting on the streets or was there a moment that inspired you to start?

Miel: I started painting walls back in high school. I was always drawing and following graffiti stuff on the internet, which was still fresh back then. I got in contact with different writers and found out about legal walls in different neighborhoods. From that point i just started getting my own paint and went painting with other writers or solo. Got into a couple of crews and started a couple, but when i met Telmo there was more ambition then just painting walls with friends.

Telmo: That’s around the period that i met him. I knew about graffiti and such, but hadn’t heard about realistic paintings with spray can. I was drawing and tried painting with acrylics once in a while, but nothing with walls. So Miel introduced me to the upcoming world of graffiti and street art. We went painting the first time in Amersfoort together, and never stopped painting and developing together. 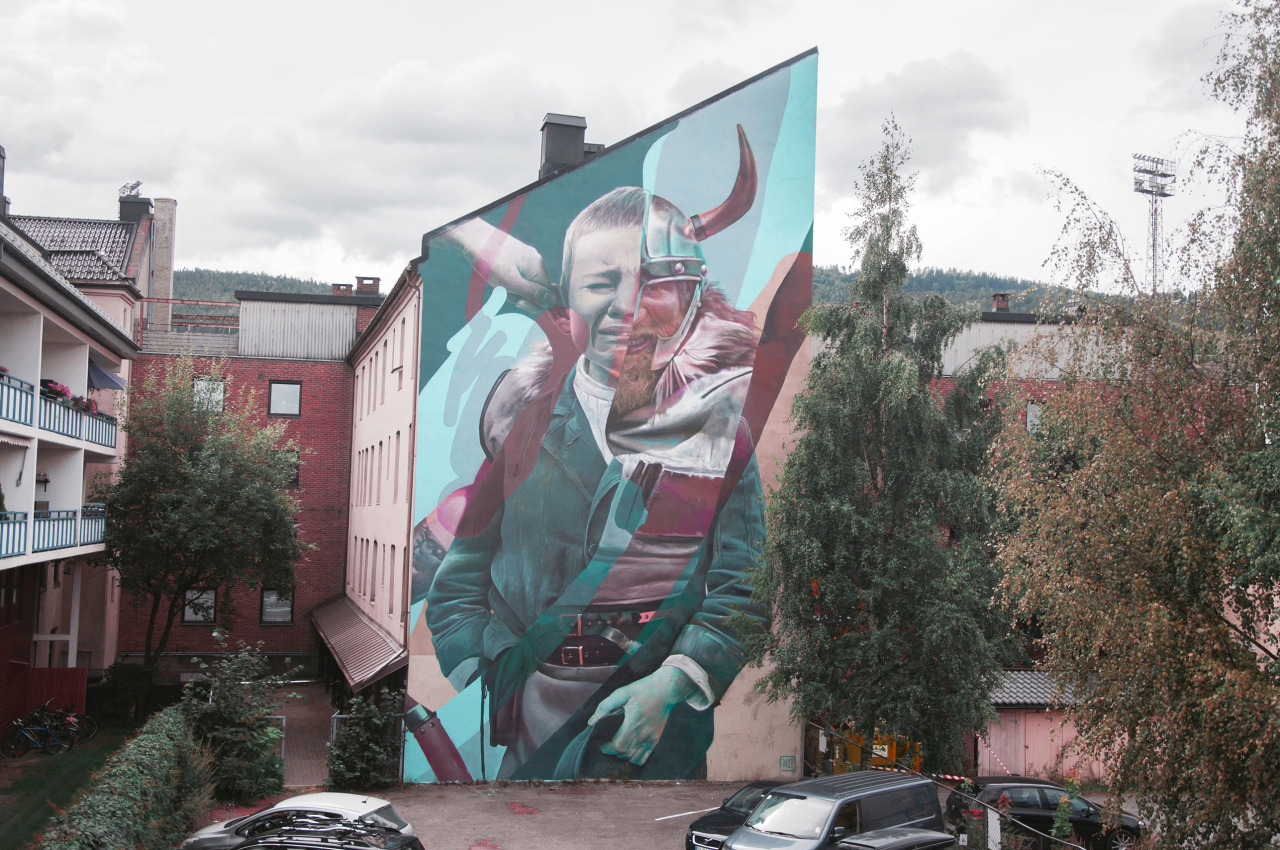 Your artwork blends so well together, what is your artistic process? Does one draw then the other or do you work simultaneously?

We sometimes discuss sketches and decide on different points. But usually we work on sketches separately and choose a favorite for a wall. On canvas we now work separately as well just because we both still have our own preferences. We have been working on a process that would make it easier for both of us to make something within the TelmoMiel line so to speak, without thinking about it. That’s when we came up with a multi layered technique. As an experiment we both made a sketch from one basic image, to see who would go where. Afterwards we didn’t really know how to process the result of that experiment, and we just put the one over the other and started erasing parts. We both saw the potential of that find, and decided to keep it.

Do you collaborate on both the ideas and composition of the work?

We do discuss both and we always have a discussion of what would work best composition wise or conceptually. But we start on idea’s separately.

What artists on the scene do you admire / are you inspired by?

A lot of artists inspire us, but to name a few; Benjamin Garcia, Etam cru, Robert Proch, Vesod, Aryz, Li-hill, Guido van Helten, Rone, Smug, Locatelli, Cinta Vidal. And a lot of respect for Felipe Pantone just for the quality and volume of production, that’s crazy.. Forgot a lot of names probably but this is a couple 🙂

What music do you listen to when creating your work?

Telmo: Really depends on the mood, could be french radio (novaplanet), hiphop, rock or even some classical.

Whats your favourite wall you have ever painted and why?

Miel: My favorite wall is usually the last one, just because it’s hopefully the best one up until now. So that would be the one called ‘Not as creepy as i seem’ in Dordrecht. But overall i think one of my favorite pieces is still the one in Sabadell at Walls Talk 6, we made a monkey skull with a bird and a glove and a bold orange background. It kind of represented where we wanted to go then.

Telmo: This is a difficult question, the last is always the best. Murals can be rated on a lot of different things, but the mural in Missouri, USA was something else, the whole trip is one of my favorites. We painted a lot of walls in big cities but this was on a Turkey Farm in the middle of nowhere. A very personal wall for a great big family.

Keep an eye out for these guys work in our upcoming group show ‘Assemblage’, great guys and talented artists. We are excited to see what they have coming up next!!